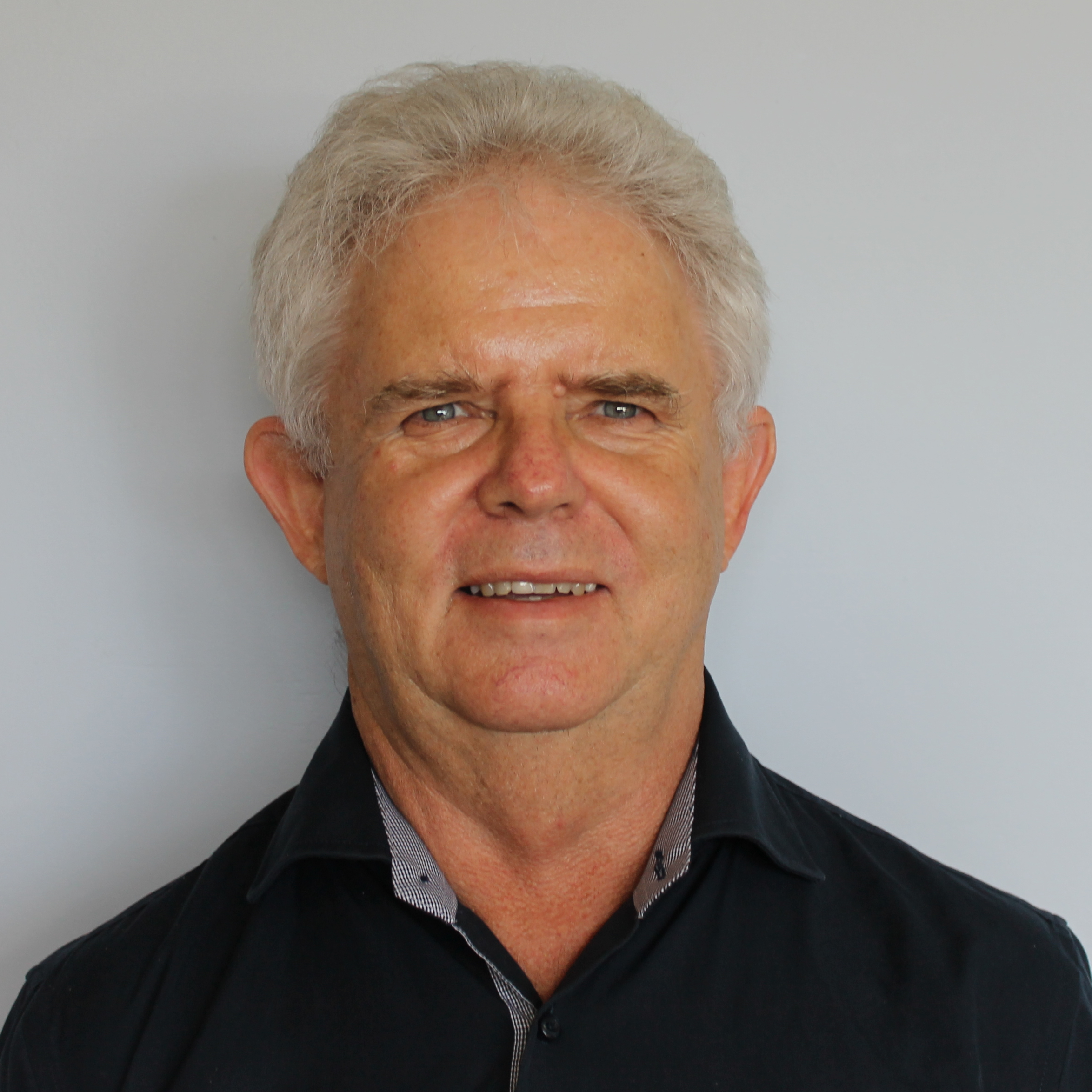 Large Generator Circuit Breakers are like no others.  With ratings to match generators of 1000MW or more, they are massive devices with continuous current ratings in excess of 25,000A at voltages of the order of 24 - 36kV.  Currents of this magnitude would be considered to be fault currents in any other environment. 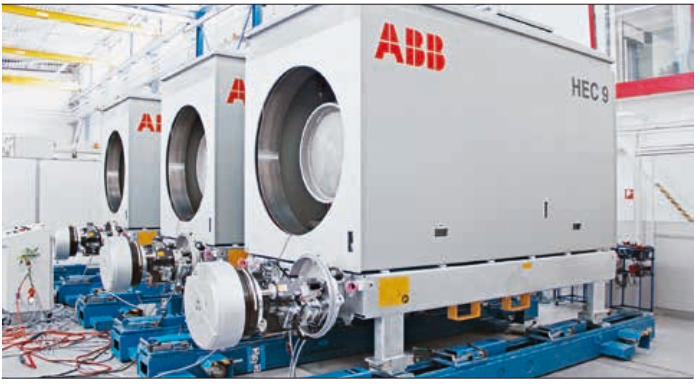 Generator circuits experience conditions that are not common and are certainly more demanding than those experienced in normal distribution circuits. These unique characteristics require breakers that have been specifically designed and tested to demanding standards. Up till 2015 the only standard recognised worldwide to specifically addressing these requirements was IEEE C37.013.

Recently the IEEE joined forces with the IEC to produce the latest IEC/IEEE 62271-37-013 Standard, also called Dual Logo Standard which aims to define and regulate the circuit breakers used to protect generation assets.

Three different types of fault which GCBs must be capable of clearing are as follows: 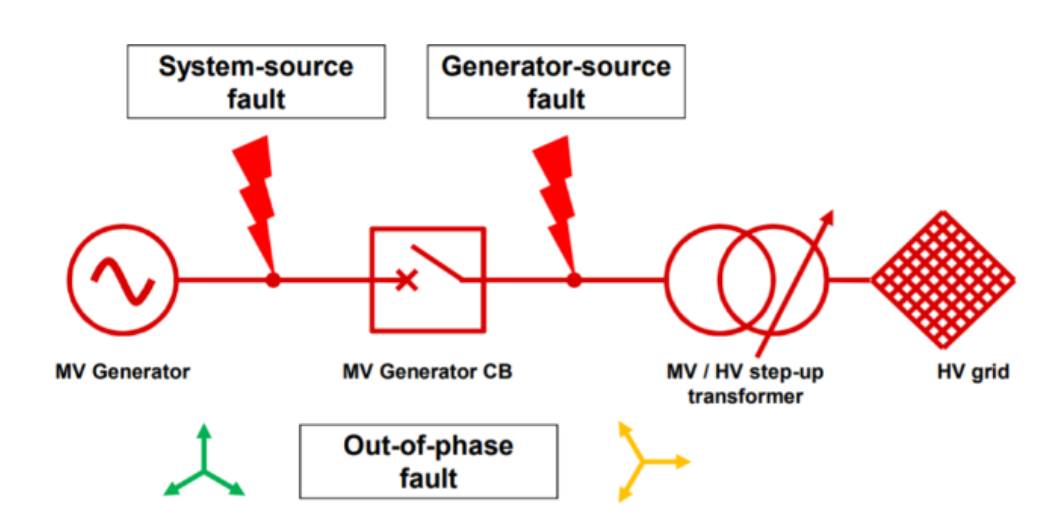 Out of Phase faults

One of the requirements of Generator Circuit Breakers is that they must be capable of breaking Out-of-Phase (OOP) fault currents.  Out-of-Phase fault currents are the currents which flow in abnormal situations where a generator is connected to a power grid but not operating in synchronism with the power grid. The most common cause of this situation is erroneous synchronisation caused by a malfunction of synchronising control circuitry resulting in a generator being “switched in” while not in phase with the network.  Although this situation is extremely rare, the consequences can be serious.  At stake is the generator, the step-up transformer and the associated generator circuit breaker.  Calculating the fault current which will flow in an Out-of-Phase situation is challenging.  Most of the commonly used modelling and fault current calculation software packages do not have a capability to calculate OOP fault current as opposed to the familiar terminal fault current.

OOP fault current can be calculated manually.  The following is from the IEC/IEEE 62271-37-013 Standard:

The out-of-phase current (Ioph) which will flow in the above circuit can be approximately calculated using the following equation when the generator is in a no-load situation prior to the out-of-phase condition.

Applying the above formulae to a typical example of a 500MW generator yields the following OOP fault current: 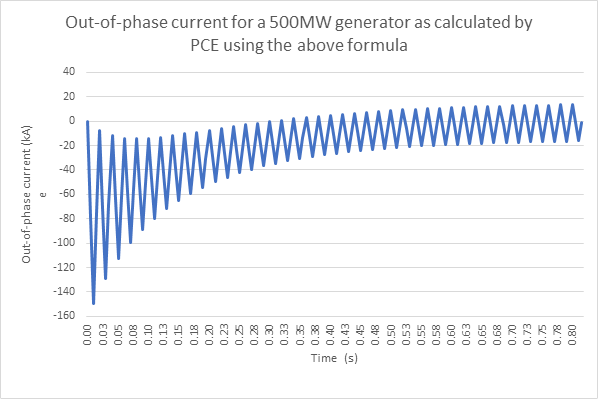 Out of Phase Switching

Out-of-phase (OOP) switching conditions occur at a coupling of two network parts of equal operating voltages, the equivalent sources of which have different phase angles, partly or entirely 180◦ out of phase (refer to Fig 2 below). A difference in the phase-angle of the rotating vectors representing the source voltages causes out-of-phase currents across the connection which must be interrupted by a circuit-breaker. Somewhere along the connection the voltage vector will decrease to close to zero, and this location is called the equilibrium point.

Note that unlike terminal faults where usually an arc is present, this is not the case here. The out-of-phase current may be larger than the transient or even the sub-transient short-circuit current of a generator.  The following diagram may be used to depict an out-of-phase fault.  Fault currents can be calculated for a range of angles between voltages S1 and S2.  Typically these calculations would include out-of-phase angles of  30o  60o  90o 180o. 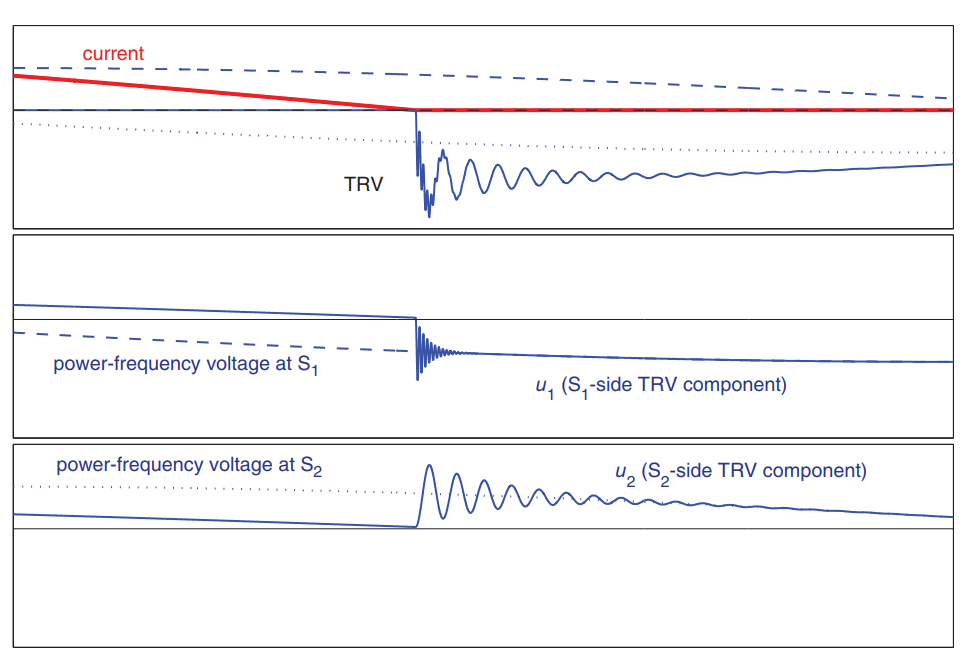 Figure 3 – Out-of-Phase TRV and its components.  The dashed and dotted traces show the power-frequency voltages of source S1 and S2 respectively

This is a specialist subject for which PCE does not pretend to have all the answers.  It is however a subject which is likely to be of interest to many power electrical engineers.  While we are happy to share our learning on the subject, we would direct those with a particular interest to the references listed below.